Joondalup Brothers was founded in 1997 by players from nearby clubs who were keen to expand the game of rugby in the burgeoning Northern corridor and have a team that would proudly represent the Joondalup area.

Our founding members; Chris Baker, Tony Barker, Leon Bettson, Neil Tumelty and Russell Peart, continue to be active members. In April 1998 Joondalup Brothers began playing competition rugby at the Arena, Joondalup. Bob Barker was the first member of the club and his son Kyle was the first junior member in 1998. From our very humble beginnings, the club has made incredible progress both in terms of on-field rugby achievements and also, more importantly, with the vital off-field set up, infrastructure and management. Now over 15 years later, Joondalup Brothers RUFC are the biggest Rugby club in Western Australia with over 200 senior players and 480 junior players.

Since 2005, Joondalup Brothers RUFC have consistently been winners of Rugby WA Junior Championships, with numerous minor and major premierships in various age groups. 2013 was a stellar year with 4 of our teams being crowned Gold Division Champions. From 2007 onwards, the Brothers began to dominate the “Districts” club champions in their competition (2007, 2010 & 2011), along with being finalist in 2005, 2006, 2008 & 2009, finishing as high as 9th on several occasions in the Rugby WA overall championship, above two of the Premier Grade Clubs in Perth. This ongoing success has strongly positioned Joondalup Brothers RUFC in its quest to be a “Premier” Rugby Club.

Since their incorporation, Joondalup has become affiliated to the Australia wide Brothers Rugby Union Federation which includes teams from Brisbane, Sydney, Cairns, Rockhampton and Townsville. This affiliation also extends to the 86 Marist Rugby Union Clubs in New Zealand and over 100 associated clubs through the world. The club moved to the impressive Beaumaris Sports Association, Iluka in 1999 which boasted excellent club bar and changing room, however, the facility was restricted by only having access to one pitch. Consequently, the club relocated in 2010 to new purpose built more centrally located facilities at the Arena Joondalup, where there is ability to expand the number of playing and training pitches.

The club now resides in a million dollar club house at the Arena Joondalup complex, has opened strength and conditioning facility and a Rugby Union Academy in conjunction with one of the clubs many sponsors. The club currently operates a strong volunteer committee which runs the administration of all senior & junior teams, works closely with State Rugby Union Body, and runs numerous rugby specific and social gatherings. The club’s off field administration have also organized and sent junior and senior teams on intrastate, interstate and international tours.

Since its inception, the club has longed for premier Grade status. Season 2014 this dream was realized when the club gained promotion into the Premier Reserves competition for the first time in its history. A huge amount of planning, commitment and hard work has been undertaken to get to this point and the rewards were soon on show with the Premier Reserves Team inaugural win coming in round 3 against Wests Scarborough 20 to 19. This was quickly followed up with a resounding win against the highly fancied Cottesloe club 46 to 13 the following week. Impressive performances continued and come season’s end our Premier Reserve Grade side finished the regular season with 13 wins from 18 games and secured a place in the finals. This was as far as the team would progress eventually going down to Associates 18 to 3 in a very tough battle. 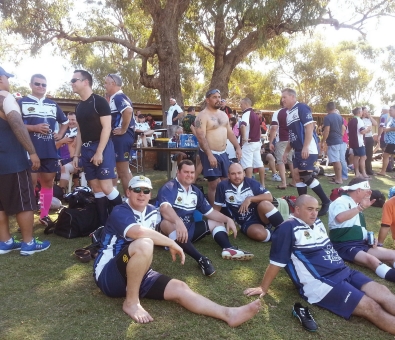 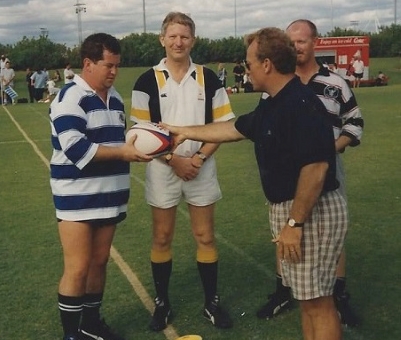 Chris Baker presents the first game ball to inaugural Captain Denis Cunnigham for the clubs first match vs Bunbury at the Arena in 1998.

In September 2014 the club presented its case for full promotion into the Premier Competition to the Community Rugby Committee (CRAC). Lead by club chairman Liam Smyth our management team tabled a very thorough and professional document, the meeting was very positive and concluded with earning their recommendation which they would later present at the next Board meeting of Rugby WA. With another step forward, we as a club awaited the final decision which was forthcoming just days later when David Redpath notified Liam that the board had accepted their recommendation and that we would be competing in the Premier Competition in 2015. The clubs dream has been realised and is now officially a Premier Grade Club. We as a club can now provide a complete player pathway to our talented seniors, youth and junior players, a pathway that can now see them strive for higher honors while wearing the blue and white. The club’s promotion is just rewards for the dedicated and hardworking committee that have contributed to the growth of our club over many, many years. It’s also just rewards for the emphatic support received from our committed sponsors and above all else it’s just rewards for all our players, both past and present, which have represented our club and worn our jersey with pride. There will be many highs and a few lows ahead, however, rest assured that as we take this next journey we will rise and conquer any and all challenges as a club and become an even more formidable force in the rugby landscape here in Western Australia in the years ahead.

open to everyone at any level